Training for the ‘new normal’ in East African aviation 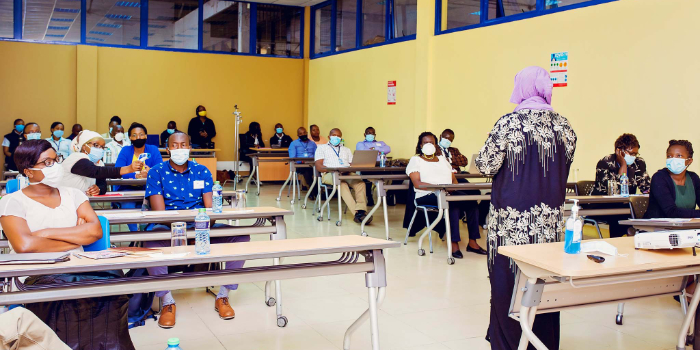 Training for the ‘new normal’ in East African aviation

East African air­space shut down in mid-March in an at­tempt to pre­vent the spread of coro­n­avirus.  Now, as air­ports across the re­gion pre­pare to re­open, it is vi­tal for the safety of both staff and pas­sen­gers, that all in­volved in the avi­a­tion in­dus­try are trained and well versed in how to deal with COVID-19 and other in­fec­tious dis­eases.

Nor­mally packed with trav­ellers and tourists, Nairobi’s Jomo Keny­atta In­ter­na­tional air­port is now eerily empty. ‘The air­port is like a de­serted crime scene… no­body wants to come,’ says Ade­laide Amaro, a se­nior per­for­mance man­ager at Kenya Air­ways. East African air­space largely shut down in mid-March in an at­tempt to pre­vent the spread of coro­n­avirus through air travel. Nairobi is an in­ter­na­tional avi­a­tion hub for flights from all over Africa and the rest of the world and the air­port nor­mally serves over seven mil­lion pas­sen­gers a year, as well as count­less cargo flights full of vi­tal ex­ports, such as Kenyan flow­ers des­tined for Eu­ro­pean mar­kets, so the eco­nomic im­pact of shut­down for both the coun­try and the re­gion has been enor­mous.

The training is both theoretical and practical, covering background information about epidemics and the regional standard operating procedures and guidelines for dealing with them. It addresses misconceptions and misinformation about the transmission of COVID-19 and shows participants how to wash their hands properly, use masks, screen passengers’ temperature, including the use of thermal scanners. It also shows participants how to safely clean and disinfect items and areas and how to handle and isolate people with symptoms.

The individuals attending the training of trainers were carefully selected: ‘Only key senior and operational staff can effectively cascade the training on to others effectively’ says Timothy Wesonga of the German-supported PanPrep project. Emile Arao, Executive Director of EAC CASSOA, agrees with him: ‘The training of trainers approach allows us to create a critical mass of competent staff who can ensure that everyone connected with aviation knows what to do and how to prevent COVID-19 from spreading.’

Due to the current restrictions on the number of people allowed to gather in one room, the two-day training sessions can only cover 15 people at a time. Only one person sits at each desk and everyone has to wear masks throughout. Hand washing facilities and sanitisers are provided at the entrance and within the class. ‘We have made sure to mitigate any risks to the participants,’ says Wesonga.  Two training sessions are planned for each of the East African international airports so that in 16 two-day training sessions 240 people will be trained in total.

At the same time, PanPrep is supporting airport staff with the procurement of personal protective equipment (PPE). CASSOA’s Emile Arao says he is grateful for this support: ‘We have been able to do this in record time, whilst adhering to procurement regulations. Initially PPE had to be procured from China, but now it is being produced locally to the same standard. The shortage of PPE has led to home grown solutions.’

While the trainees are very motivated to learn and accepting of the ‘new normal’, there is a long way to go in a short time. ‘The way we treat passengers will have to completely change,’ says Adelaide Amaro, a senior performance manager at Kenya Airways in charge of the airline’s operation manuals and training.

‘Nyumba Kumi’ is a Swahili expression roughly meaning ‘you are your brother’s keeper,’ and this sentiment has to be the basis for a regional approach to such outbreaks, says CASSOA’s Emile Arao. Local solutions will not be effective unless the bigger picture is taken into consideration and countries in the region and across Africa work together.

‘We are all very happy about the support we get from the German government for our regional pandemic response. The training conducted by AMREF has been first class,’ says Emile. However, he also warns that it is a ‘drop in the ocean’ when viewed in relation to what is needed. Emile is keen for the training to be shared with other countries and regions as well and has briefed the African High Level Task Force on COVID-19 accordingly. The African Union has also expressed interest in rolling out similar trainings across the continent, including at the domestic airports that feed into Africa’s international airports.

Meanwhile, at Jomo Kenyatta International Airport, Adelaide Amaro’s verdict on the two day-training is ‘This has been really useful. It is what every airline needs for going back to work. It will give staff and the public confidence.’